Questions to Ask Prior to Hiring a Mobile App Developer 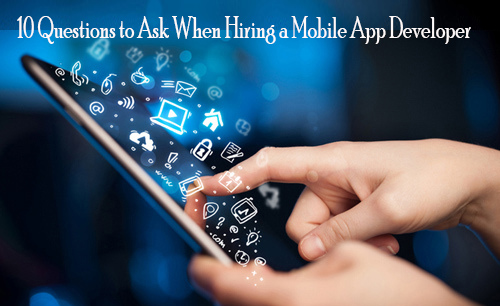 Mobile phones are always handy and quick to access no matter where you are, at home, in the office or on the go. The smartphone available these days have so many features with high processor speeds that even some of the desktop PCs might not have.

Thus it is no wonder that more number of people are using mobiles devices instead of the computer. Unlike a computer they do not require to be turned on and booted since the mobile is always on. Unless your job involves working on a computer, it is hardly like that you will have the PC turned on all day.

The statistics tell it all:

The statistics gathered over the past few years tell the perfect tail:

These statistics make it abundantly clear that you need to make your presence felt on the Mobile device. This can be done via a mobile ready website or better still a mobile app.

Do you have a Mobile Apps portfolio?

One of the easiest ways of judging the skills, methods and professionalism of a mobile app development firm is by their previous work. Once you have the links to their past projects across several platforms like iOS, Blackberry and Android all you need to do to download those apps and install them to your device to how they fair.

Check the factors that matter to you to most. For example if it is a photo gallery app check if the navigation is intuitive and easy to find. You can also check if has all the features one might expect in a photo gallery, like share, zoom, rename, sorting, view style, etc.

What do other clients have to say about you?

In most cases you be always be able to get your hands on the previous clients of the developer. This may in the form of testimonials or a good review. At times you may be able to contact the clients directly as well to get their detailed review of their personal experience with the firm.

Besides contacting the previous clients, it also may be a good idea to scourge the Internet for references pertaining to them. Almost everyone is on Social Media and hence Social Media websites are good place to start.

What are the methods of making money via my App?

However in general there are two main methods to make money with your Apps. One way is to charge a download fee for your app which usually ranges anything between 99 cents to $4.99 for small scale apps and gradually increases depending on the complexity.

You can also choose to make the app a free download in which case the other method of earning a revenue from your apps is via the adverts on the App.

Do you have any limitations when it comes to development?

This may seem like a mundane question to many but is really quite necessary as those who have had some experience getting Apps or websites developed might know.

At times it happens that you require some sections of your App to have a very specific effects or functionality. If your requirements happens to be very complicated it might not be possible for the developer to deliver it. This can effectively spoil your entire project if you were depending on that feature to be added and you are then left with limited options of either dumping the current firm at a cost and selecting another one or going ahead without the feature.

Hence to avoid such situations it is a good idea to be prepared.

Who owns the finished App and who will upload it to the stores?

It is best to clarify the issue of ownership of the App from the very beginning. Doing so can go a long way in avoiding confusion at a later date; at which time it would be very hard to solve.

Although uploading the App to the App store is not the hardest process it can often get quite time consuming. Thus it can hurt to get that detail out of the way earlier on.,

How much will it cost and how long will it take?

The project timeline is usually something that you would work out earlier on in the initial stages. This helps the firm deliver on time and not extend the deadline and at the same time

Mobile App development has taken off on a large scale with several firms offering similar services. At times it becomes necessary to ask all the tough questions prior to making the right decision. With Alakmalak, their experience and skill level speak for themselves.