React JS VS Angular JS: Which one to choose for your App?

In this post, you’ll discover how Angular and ReactJS use very different attitudes to solve similar front-end problems and why preferring one over the other is just a matter of personal opinion. To compare them, you need to create the same application twice: once with Angular and once with ReactJS. But the increasing popularity of React makes it the most downloaded framework on NPM.

Going with the Angular framework is a good choice when:- Your team has experience with Java, C#, and previous versions of Angular.

Basically, it promotes unidirectional data flow, through a store that saves the current state of the application – an action that is a request to change the application state and a reducer to perform this request.

React Native is a platform developed by Facebook for creating native mobile applications using React. React is a JavaScript library for building user interfaces. Angular.Js was launched by Google in 2009 as an open-source framework that allows developers to craft unique solutions especially with the development of single-page applications.

Reusability of React Components and Saving Time When Facebook introduced React into the open-source community, they spotlighted its capability to reuse code components of a different level anytime, allowing back-end developers and front-end developers to save dramatic amounts of time. Also, React is more dependent on a state management library.

We have highlighted the major points that showcase the difference between the History of React vs. Angular React is a JavaScript framework for creating user interfaces.  AngularJS is a JavaScript-based open-source framework for developing web server front ends. Angular is created and managed by a team of Google engineers. In 2010, it was released for the first time. 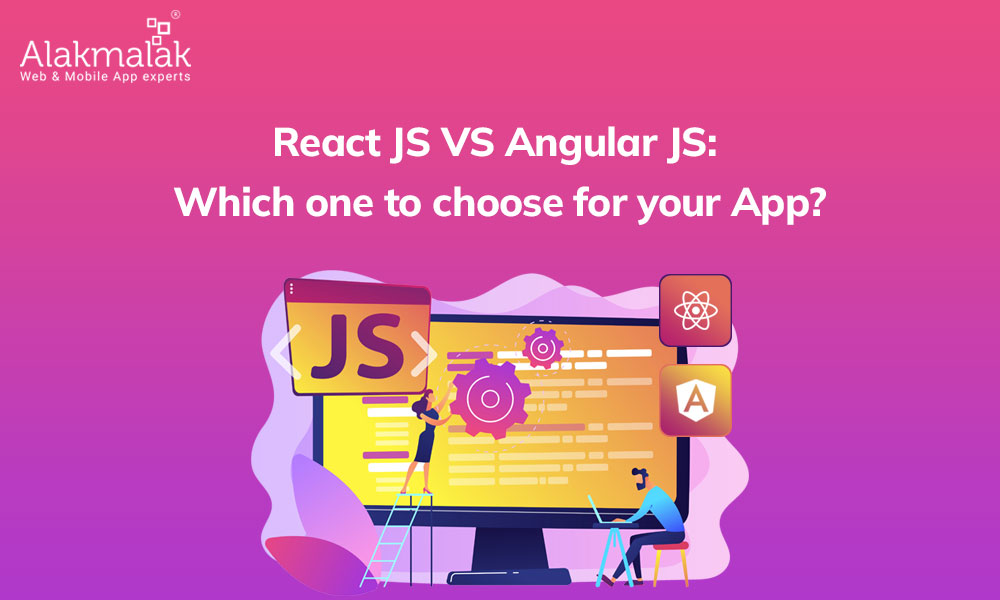 The architecture of React vs. Angular

There are also similarities and variations between Angular and React. One distinction is that Angular is a full-fledged MVC platform, while React is just a JavaScript library (just the view). Angular is classified as a system, and it has clear views of how the program can be organized.

Learning Curve of React vs. Angular

Angular obviously has a higher entry barrier than React. The sheer number of new ideas can be perplexing for beginners. And after you’ve begun, the experience may be a little rocky since you’ll need to consider stuff like Rx.js subscription control and change detection efficiency. So if you have an Angular project without any forms, you’ll not be shipping the form validation part of Angular in your final, optimized code.

The most significant distinction is in state administration. Angular includes code-binding, while Redux usually supplements ReactJS to include unidirectional data flow and function with immutable data. There are competing methods in and of themselves, and several debates are now taking place about whether mutable/data binding is better or worse than immutable/unidirectional.

Although two-way data linking can be introduced in React, it was never really built for it. The relation between a part and a view is often one-way by nature.
Angular is built on the standard MVVM architecture instead of React, which is based on Flux architecture. Angular’s Model (Component’s logic) and View (UI) are closely bound, and as a result, we can quickly enforce two-way data-binding in Angular.

Some of the standard features are dependency injection templates, based on an extended version of HTML class-based components with lifecycle hooks component CSS encapsulation XSS protection code splitting and lazy loading test runner, framework, and utilities for unit-testing.

Since it does not completely support dynamic programming and data immutability, React does not fully support dependency injection. The most significant feature of Angular is that, unlike React, it allows dependency injection. As a result, Angular supports different lifecycles with different The React group developed the React UI tools. On the React portal, developers can find a plethora of free and paying UI components.
Developers who wish to use Material Design components in React must install an additional library – Material-UI library and dependencies.
It includes a built-in Material toolset with a plethora of pre-built Material Same Application, Built Twice As a result, we will create the Same application in ReactJS and Angular.
Same Application, Built Twice :
You’ll note that we have used TypeScript for the React app. The benefits of form verification in TypeScript are self-evident. And now that TypeScript 2 has improved import handling, async/await, and rest spread, it has surpassed Regular DOM vs. Virtual DOM.
Regular DOM vs. Virtual DOM :
As previously said, Angular development employs Regular DOM, while React employs Virtual DOM. ReactJS will become blazingly quick thanks to the interactive DOM. On the other hand, regular DOM attempts to update the whole lot before it hits the destination, the user’s age.

The flexibility of Libraries vs. Robustness of Framework :

The flexibility of Libraries vs. Robustness of Framework Choose a portion of the project’s core highlights and attempt to implement them in a hurried manner using one of these – Angular turn of events and ReactJS creation. Alternatively, you can choose an Angular software firm that also provides ReactJS development services, which would save you a lot of time and effort in the long run.

Conclusion :
That’s about it! Both systems have their own set of skills, each with its own set of positive and negative aspects. Choose a portion of the project’s core highlights and attempt to implement them in an effective manner using one of these – Angular turn out for events and ReactJS for creation. Alternatively, you can choose an Angular software firm that also provides ReactJS development services, which would save you a lot of time and effort in the long run.

If you want to help you in making angular or react js application we can help you out. Please contact us here for your upcoming projects.